The oil pump in an  internal combustion engine circulates engine oil under pressure to the rotating bearings, the sliding pistons and the camshaft of the engine. This lubricates the bearings, allows the use of higher-capacity fluid bearings and also assists in cooling  the engine.

As well as its primary purpose for lubrication, pressurized oil is increasingly used as a hydraulic fluid to power small    actuators . One of the first notable uses in this way was for hydraulic tappets in camshaft and valve actuation. Increasingly common recent uses may include the tensioner for a timing belt or variators for variable valve timing    systems.

High Oil Pressure
The end result of too high an oil pressure is the front or rear main engine seals will be blown and or blow the oil plugs out. In other words, any possible entry into the crankcase that is sealed somehow could be blown. High oil pressure frequently means extremely high pressure on cold start-up, but this is a design flaw rather than an automatic consequence of high pressure. The observation "if you raise the maximum pressure, the cold pressure goes too high" is accurate, but not intentional.

Even the stock pumps (regardless of brand and model) do not have enough relief valve capacity: the relief port is too small to handle the volume of cold oil. This is why there is a significant difference between cold & hot oil, high & low RPM, & c., But it's typically not a problem with stock engines because of the spring-loaded pressure relief valve mentioned above. A correctly designed relief port (which is not found in production engines) will flow any oil volume the gears will pass , Regardless of oil viscosity or temperature, and the gauge reading will only vary slightly.

Low Oil Pressure
There are only 4 reasons for low oil pressure. 1) no oil or low oil in the engine, 2) worn or defective oil pump or broken pressure relief valve spring, 3) worn main bearings (big ends have nothing to do with oil pressure as most of the pressure to these are supplied by centripetal force) and 4) oil gallery fracture or blockage. Low oil pressure can cause engine damage. First thing to fail will be cam carrier bearings if vehicle is OHC as this is fed through a restrictor and low pressure will starve top of engine of lube. If pistons have crown jets eg scania, could cause piston / liner nip. Also the crankshaft and connecting rod bearings will seize. Indications of low oil pressure may be that the warning light is on, a low pressure reading on the gauge, or clattering / clinking noises from the engine.Low oil pressure is a problem that must be addressed immediately to prevent serious damage.

The leading cause of low oil pressure in an engine is wear on the engine's vital parts. Over time, engine bearings and seals suffer from wear and tear. Wear can cause these parts to eventually lose their original dimensions, and this increased clearance allows for a greater volume of oil to flow over time which can greatly reduce oil pressure. For instance, .001 of an inch worn off of the engine's main bearings can cause up to a 20% loss in oil pressure. Simply replacing worn bearings may fix this problem , but in older engines with a lot of wear not much can be done besides completely overhauling the engine.

Particles in the oil can also cause serious problems with oil pressure. After oil flows through the engine, it returns to the oil pan, and can carry along a lot of debris. The debris can cause problems with the oil pickup screen and the oil pump itself. The holes in the oil pickup screen measure about 0.04 square inches (0.26 cm  2 ). Holes of this size only pick up bigger pieces of debris and allow a lot of smaller pieces to flow through it. The holes in the screen are so big (relative to debris) because at low temperatures and slow engine speed the oil is very viscous and needs large openings to flow freely. Even with these large holes in the screen, it can still become clogged and cause low oil pressure. A .005 -inch-thick (0.13 mm) coating on the screen can reduce hole size to about .03 square inches (0.19 cm 2  ), which in turn reduces the flow of oil by 44 percent.

Even after passing through the oil pickup screen and the oil filter, debris can remain in the oil. It is very important to change the oil and oil filter to minimize the amount of debris flowing through your engine. This harmful debris along with normal engine wear in high mileage engines causes an increase in clearances between bearings and other moving parts.

Low oil pressure may be simply because there is not enough oil in the sump, due to burning oil (normally caused by piston ring wear or worn valve seals) or leakage. The piston rings serve to seal the combustion chamber, as well as remove oil from the internal walls of the cylinder. However, when they wear, their effectiveness drops, which leaves oil on the cylinder walls during combustion. In some engines, burning a small amount of oil is normal and shouldn't necessarily cause any alarm, whereas burning lots of oil is a sign that the engine might be in need of an overhaul.

Oil Pumps in High Performance Engines
Not all engines have the same oiling needs. High performance engines, for example, place higher stress on the lubricating system. In this case, the lubricating system must be especially robust to prevent engine damage.  [2]   Most engines in cars on the road today don't run much past 5,000–6,000 rpm, but that isn't always the case in performance engines, where engine speeds could reach up to 8000-9000 rpm. In engines like these, it is imperative that the oil circulates quickly enough , or air may become trapped in the oil. Also, to free up power, some engines in performance applications run lower weight oil, which requires less power to run the oil pump. Common oil weights in engines today are usually either 5W-30 or 10W-30 oil, whereas performance engines might use 0W-20 oil, which is less viscous.

Wet and dry sump systems
Conventional   wet sump   engines have one oil pump. It is generally located inside the lower part of the engine, usually below and / or to one side of the crankshaft. On   dry sump   engines, at least two oil pumps are required: one to pressurize and distribute the oil around the engine components, and at least one other 'scavenge pump' to evacuate the oil which has pooled at the bottom of the engine. This scavenge pump is sometimes (but not always) located in the 'sump' of the engine , and crucially, this scavenge pump's flow-rate capacity must exceed that of the pump which pressurizes and distributes oil throughout the engine.

Because of the dry sump's external oil reservoir, excess air can escape the oil before the oil is pumped back through the engine. Dry sumps also allow for more power because they reduce the amount of   windage  , oil sloshing up into the rotating assembly, and the vacuum from the scavenge pump improves ring seal. Dry sumps are more popular in racing applications because of the improved power and reduced oil sloshing that would otherwise reduce oil pressure. Disadvantages of dry sumps are increased weight, additional parts, and more chances for leaks and problems to occur. 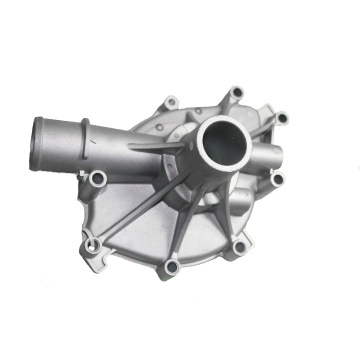